For a short time in the late 1800s, the Hamilton House in Whitewater was the home of the Posey family – Oliver, Sarah, and their children. After a few years, they sold the house and headed to California. When their oldest son Oliver William Posey died in his mid-30s, followed by Sarah herself six years later, their bodies were returned to Whitewater for burial in Hillside Cemetery.

Their spirits returned to Hamilton House.

When the house served as a UW-Whitewater fraternity the ghost of a young boy was known to bother students in the middle of the night, and a woman in a nightgown was seen in the garden.

Places Near the Hamilton House 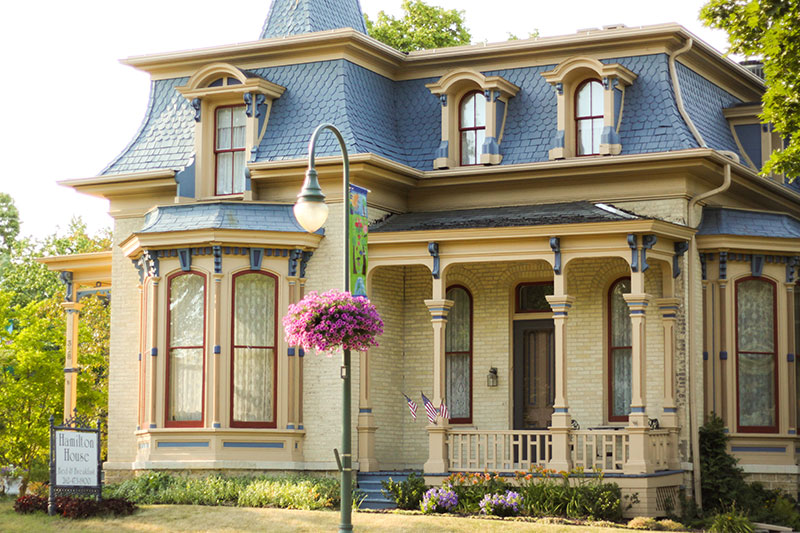 Ghosts of the Hamilton House

Whitewater is full of legends and ghosts, from the Spook Temple where Morris Pratt’s students of spiritualism conjured the dead, to the Witches Tower that looms over Starin Park. Some believe that every building that falls within the triangle formed by the town’s three cemeteries is haunted.

The Victorian mansion now known as the Hamilton House Bed & Breakfast is no exception.

The Posey family – Oliver, Sarah, and their children – lived in the house just a short time, but it was long enough to leave their mark. Sarah taught art in the house, and set hand painted tiles into the staircase and fireplace. One of them was a portrait of her oldest son Oliver William Posey.

Sarah was happy in the home, but for Oliver, Whitewater wasn’t going to satisfy his desire for wealth. After only a few years, Oliver sold the house and the family moved to California.

The younger Oliver died in 1920 around the age of 36 or 37, and his body was returned to Whitewater and buried in Hillside Cemetery. Sarah also returned to the place she was happiest when she died six years later.

By the 1950s the Hamilton House had fallen into disrepair, and someone noticed the portrait of the young Posey boy was missing from the fireplace. That’s when strange things began to happen around the house.

In the 1960s and 70s, when the house served as a UW-Whitewater fraternity, students frequently encountered the spirit of a boy who would appear at the foot of their beds at night. They described him as annoying, like a little brother craving attention. One person refused to ever step foot in the house again after his experience.

The boy seemed to favor one room in particular, which had been Sarah’s when they lived there.

A woman in a nightgown, believed to be the ghost of Sarah Posey, was also seen frequently standing near a particular spot in the East Garden.

After it’s fraternity days, the next owners turned the back hallway of the house into a doll museum. They would often find the dolls moved, sitting in chairs, or lying on the floor. They figured it must have been Little Boy Posey looking for attention.

Later, during renovations, the missing tile suddenly turned up. It was found in the East Garden at the spot where Sarah was always seen. It was returned to its place in the fireplace, and that act seems to have put the restless spirits of Hamilton House to rest. Neither Sarah, nor the young boy, have been seen since.

Sarah’s room, the one the ghost boy preferred, is now known as the Pissarro room, and is available to stay the night in.

Though she was acquitted, evidence suggests Nellie Horan poisoned and murdered her family with strychnine over the period of two years in the late 1880s.