You are here: Home1 / Points of Interest2 / Open Burial Mound

The Sheboygan Indian Mound Park is a 1,000-year-old sacred burial site constructed by the Effigy Mound culture who were ancestors of the Wisconsin Woodland Indians from about 500-750 AD. The mound builders created large dirt mounds in the shape of animals, birds, and lizards – many of which were used for burials.

Many large groups of mounds were identified in Wisconsin as early as 1855, but most were plowed over for farming or construction. The Kletzien Mound Group in Sheboygan originally consisted of 33 mounds, but today only 18 remain. They were excavated by archeologists from the Milwaukee Public Museum in 1927 and found to contain both flexed and bundle burials.

The open mound display is a window into one of these burials, depicting a skeleton buried in a typical flexed position with artifacts. It was constructed in 1968 and composed of “replica skeletal material.” 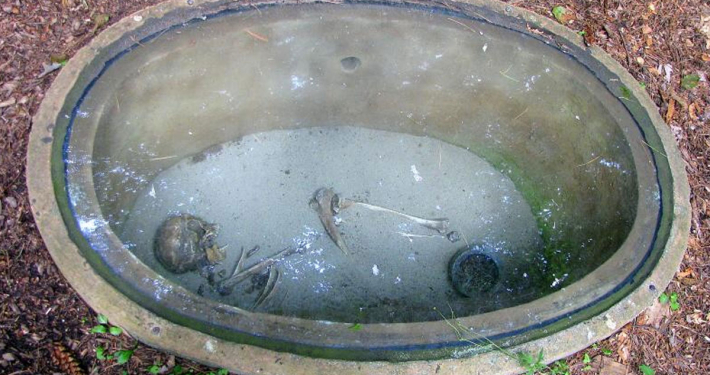 A window into an open burial mound in the Sheboygan Indian Mound Park depicts a typical burial with a replica skeleton and artifacts.

You are here: Home1 / Points of Interest2 / Open Burial Mound