On October 8, 1871, the deadliest fire in U.S. ravaged the frontier town of Peshtigo, Wisconsin. The fire began on the same night as the Great Chicago Fire to the south, but was far more devastating. The tornado of flames crossed the Peshtigo River and wiped out both sides of town – every building was lost – with deaths estimated between 1,200 and 2,500 people. All local records were lost, so it is impossible to tell how many may have died.

1,875 square miles of forest and 17 communities were destroyed. Survivors, many of whom sheltered in wells, the river, or other nearby bodies of water, claimed the firestorm threw rail cars and houses into the air.

The Peshtigo Fire Cemetery includes a mass grave of 350 unidentified men, women and children who perished in the inferno. Many had been burned so badly they were unidentifiable, while others whose features remained visible could not be identified because there was no one left alive who recognized them.

The Peshtigo Fire Cemetery marker was erected by the citizens of Peshtigo in 1951. It was the first historical marker in the state.

The museum is housed in the first church built after the fire. It contains artifacts and stories from the fire. Visitors have reported hearing ghostly voices, seeing apparitions, smelling smoke, and one even reported seeing the church engulfed in phantom flames.

Places Near the Peshtigo Fire Museum 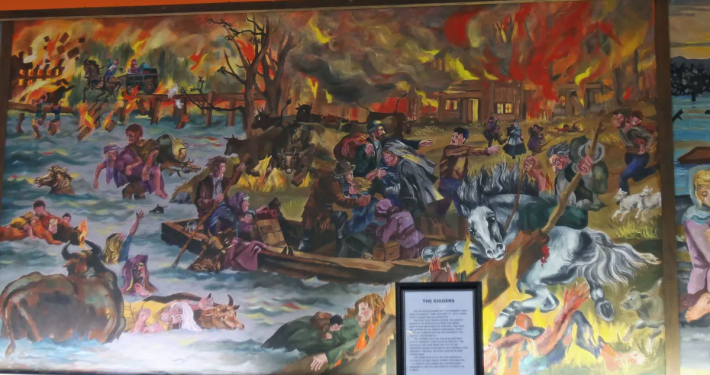 The Peshtigo Fire Museum displays relics and tells the story of the devastating 1871 inferno that wiped out 17 towns and left as many as 2,500 dead.