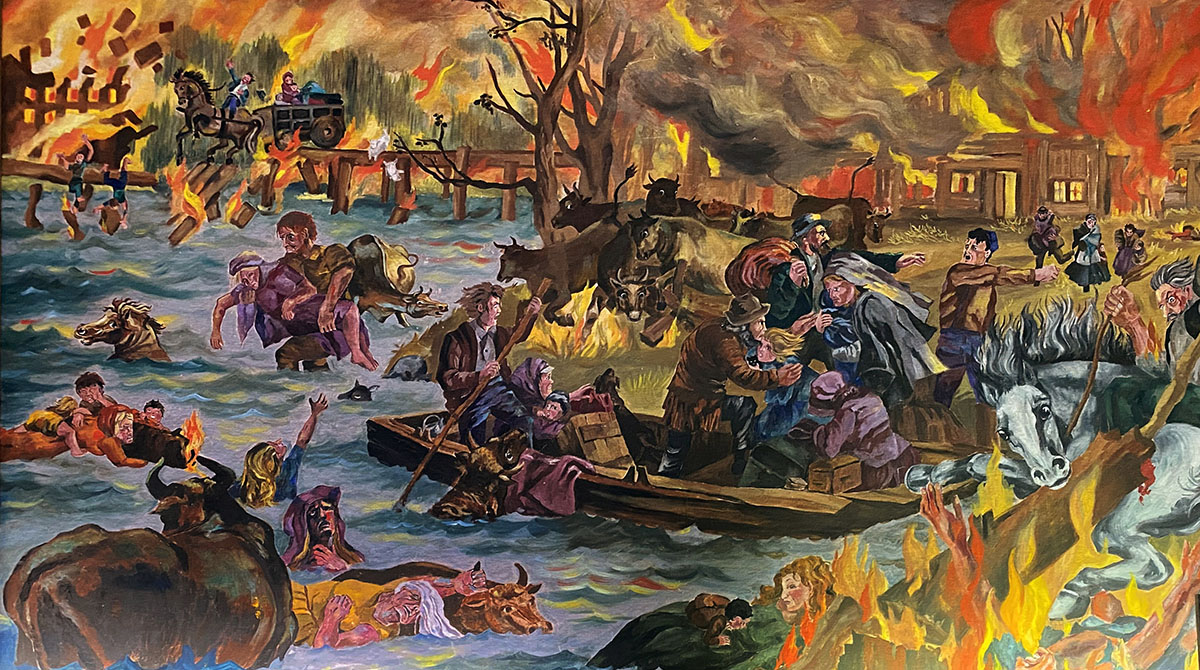 On the night of October 8, 1871, a raging firestorm known today as the Great Peshtigo Fire devastated massive swaths of Wisconsin – more than a million acres were almost instantaneously incinerated, and entire communities were reduced to ash.

It had been a hot year, and one of the driest on record. Small wildfires cropped up sporadically throughout the summer and into the fall. But on that quiet Sunday evening, even with an orange glow in the sky and smoke clotting the still night air, no one could have anticipated the hellish inferno that was coming to swallow them up.

Peshtigo was a thriving frontier logging town. It was home to the country’s largest woodenware factory, milling logs that were floated down the Peshtigo River into buckets, broom handles, barrels and other goods. There were stores, hotels, factories, two churches, and even a schoolhouse, which the community was rather proud of as that was a rarity in those days.

But the drought that year dried out all that wood and turned it into tinder awaiting an ignition source.

It was common practice to clear land with fire for farming or construction. Local farmers, as well as railroad workers laying rail through the heavily forested area to connect Milwaukee with Michigan’s Upper Peninsula, had inadvertently started numerous brush fires in the days leading up to the disaster. There were so many small fires, in fact, that ships in the bay were having difficulty navigating through the dense smoke rolling out over the lake.

Small fires were usually manageable. When a cold front swept across the northeastern part of the country that evening, however, the swirling cold air quickly churned those small brush fires into a blazing tornado that engulfed Peshtigo in a sea of flames before there was even time to react. The firestorm was so intense and violent that, as survivors recalled, the inferno swept houses and train cars up into the air and twisted trees right out of the ground.

The sound was “like a thousand locomotives rushing at full speed,” a “deafening, persistent roar that never stopped but kept growing louder.” Some called it the “sound of judgment.”

The town was entirely wiped out and 800 people were dead within an hour. By morning, 17 communities across more than 1,875 square miles were reduced to smoldering ash, and as many as 2,500 lives were lost.

Survivors said they thought the end of the world had come. Judging by the tragedies they endured – and the bizarre phenomena they witnessed – it’s easy to understand why.

Here are some of the more curious facts and distinctly bizarre stories from the Peshtigo Fire: 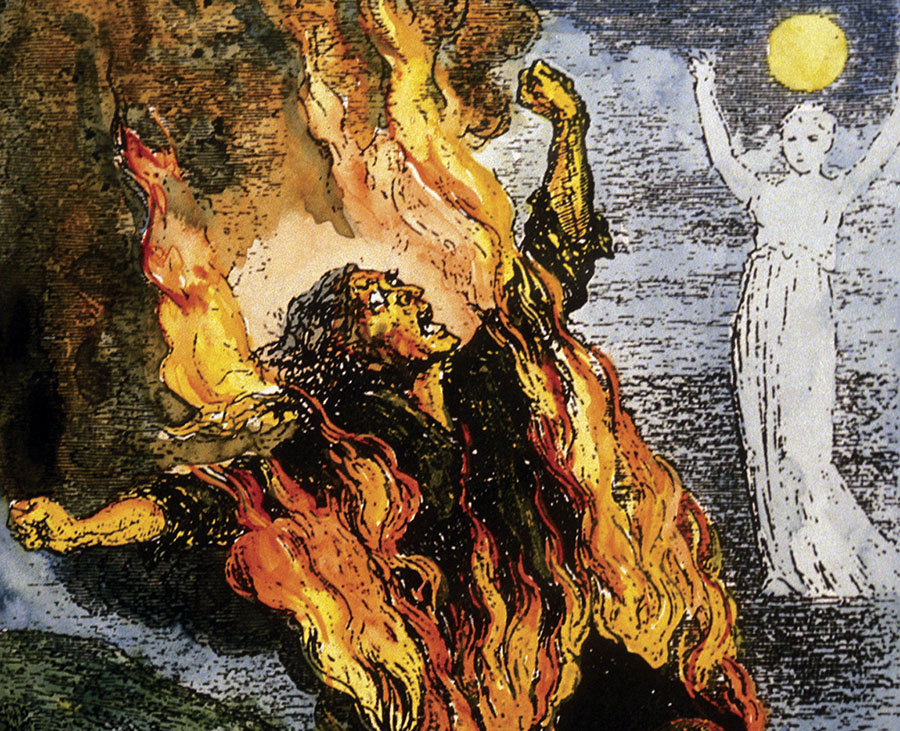 18th-century print of a man on fire

The swirling vortex of flames was so hot that it was said to have split boulders, melted train car wheels, and even church bells. People and animals rushed to the river for safety, where some died of hypothermia in the freezing waters, while others were said to have boiled to death. Fish died in droves, covering the surface of the river the next morning.

The air itself was so hot that it was described as “unfit to breathe,” and many couldn’t even open their eyes and they fumbled through the blaze. Reverend Peter Pernin, who had served as parish priest for both Peshtigo and Marinette churches and wrote extensively about his experience during the fire, said that he believed the air had been “impregnated with an inflammable gas most destructive to human life.” He even noted that while fleeing his home, there had been “tiny globules of fire” flying around inside.

In the days that followed, bodies were found untouched by flame, but the watches and change in their pockets had melted. Nails lying completely out of the path of the fire had nonetheless been reduced to molten blobs.

Witnesses recalled a harrowing scene as 16-year-old Helga Rockstead met a particularly ghastly fate. The young girl was running down the boardwalk, desperately trying to outrun the flames. Her long, waist-length hair was flowing behind her when it suddenly erupted into flames and quickly engulfed her entire head, followed by her dress and the rest of her body.

Of course, the phenomenon of spontaneous human combustion usually refers to the victim mysteriously bursting into flames internally, such as the case of Jeannie Saffin in 1982, whose father witnessed flames coming out of her mouth “like a dragon,” or the man found in an abandoned house in London in 1967 with a bluish flame emanating from a hole in his abdomen. “There was a slit of about four inches in the abdomen and the flame was coming through there at force, like a blowlamp,” the officer who found him reported.

In Helga’s case, the source of the fire was external, and the reason for her combustion was quite apparent. 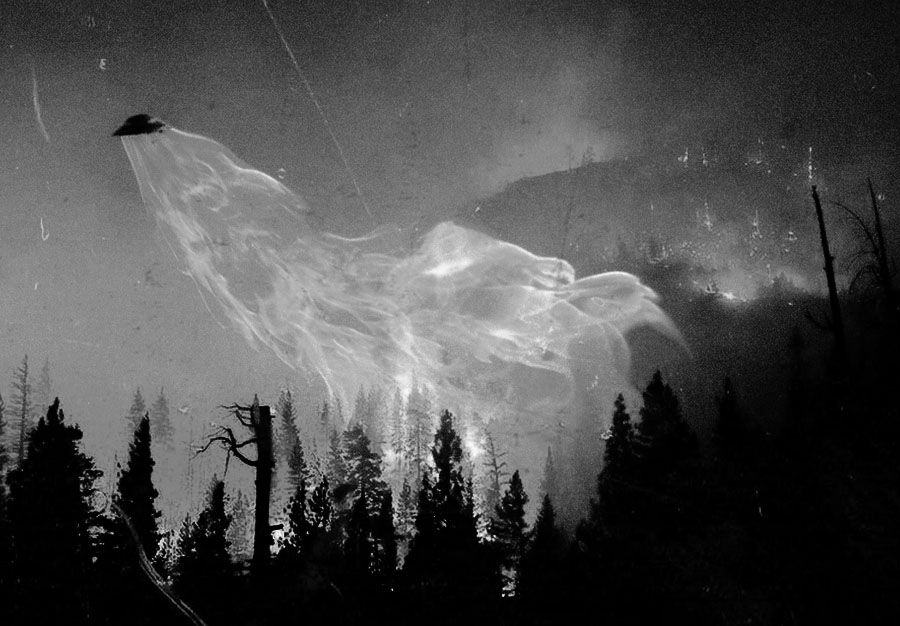 “When the hurricane burst upon us, many, surprised and terrified, ran out to see what was the matter,” Father Pernin wrote. “A number of these persons assert that they then witnessed a phenomenon which may be classed with the marvelous. They saw a large black object, resembling a balloon, which object revolved in the air with great rapidity, advancing above the summits of the trees towards a house which it seemed to single out for destruction. Barely had it touched the latter when the balloon burst with a loud report, like that of a bombshell, and, at the same moment, rivulets of fire streamed out in all directions. With the rapidity of thought, the house thus chosen was enveloped in flames within and without, so that the persons inside had no time for escape.” 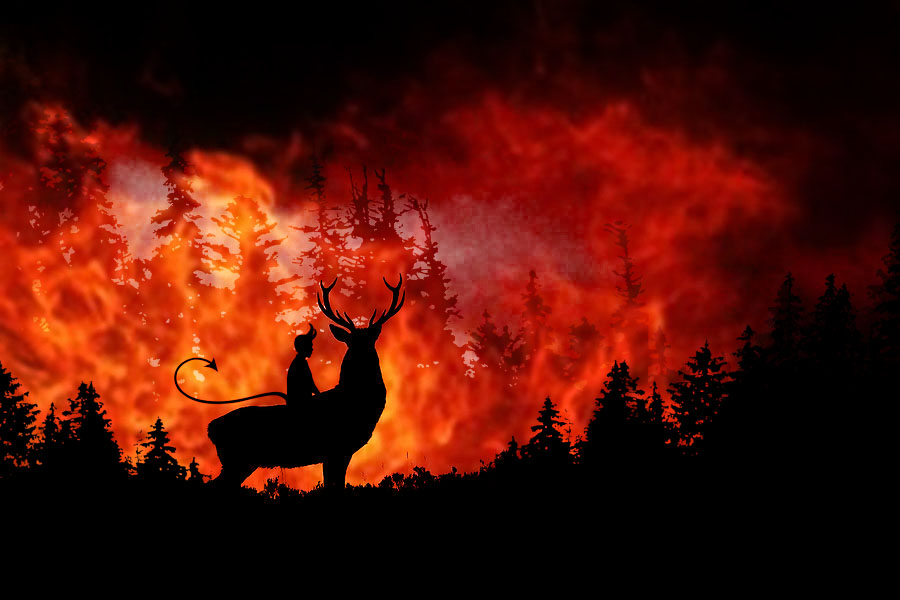 As detailed by Wisconsinology, witnesses from Outagamie, Brown and Manitowoc counties reported seeing a demon boy riding a black stag with massive horns, spreading fire as he rode through the countryside. 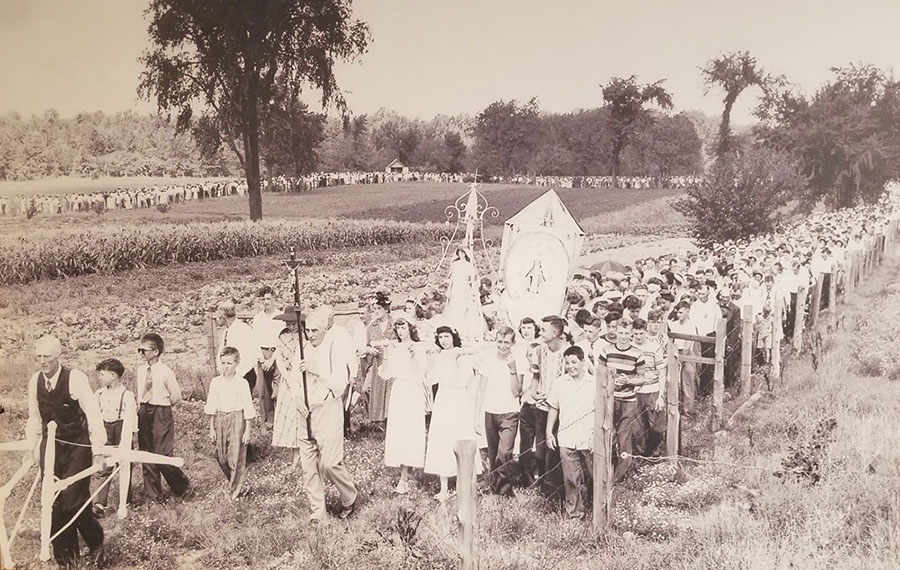 Procession around the grounds of the Champion Shrine, 1954

The National Shrine of Our Lady of Good Help in Champion, Wisconsin is the site of the only Marian apparition sighting officially recognized and approved by the Catholic church in the United States.

In 1859, a Belgium immigrant named Adele Brise encountered a woman in white there. The woman identified herself as the “Queen of Heaven” and instructed Adele to pray for the conversion of sinners. A shrine was built to honor this appearance of the Blessed Virgin Mary.

12 years later, while the firestorm raged in Peshtigo and surrounding areas, many area residents (and their livestock) sought refuge at the chapel. Adele organized a procession with a statue of Mary around the sanctuary, asking the Blessed Virgin for protection. They spent the night singing hymns and praying the rosary.

The following morning, the group emerged from the chapel to discover everything around them had been destroyed. The fire had scorched the land and buildings around the chapel, and even singed the fence around the property, but never entered the grounds. 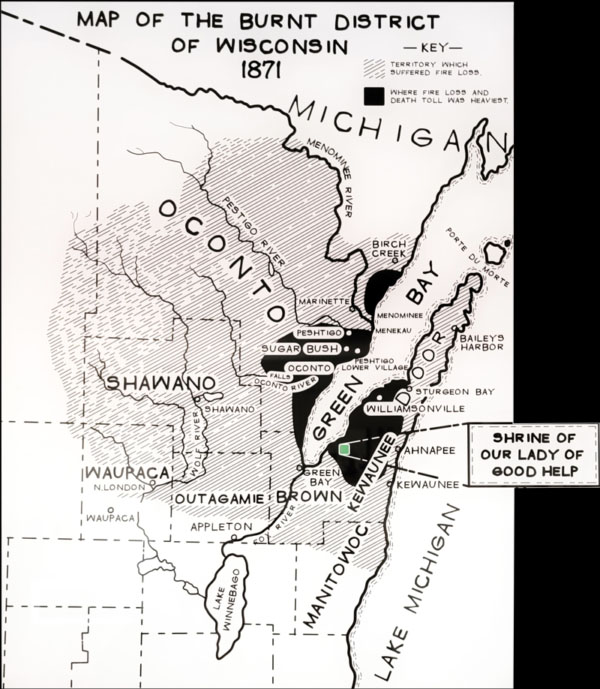 Today, this event is known as the “Miracle of the Fire.”

“To this day, many descendants of those whose lives were spared during the October 8, 1871 fire come to celebrate the miracle on its anniversary,” the shrine’s website says. “October 8 continues to draw thousands of people from around the country to visit the Shrine and join in all-night prayer into October 9 – the date historians believe marks the anniversary of Mary’s last appearance to Adele.”

The anniversary of the Miracle of the Fire and the Apparition of Our Lady is celebrated every year with various events, including the Enrollment in the Confraternity of the Most Holy Rosary, the Historical Reading of the Miracle of the Fire, a rosary procession with a statue of Mary, and all-night adoration from 9pm to 7am with the rosary said on the hour, followed by the anniversary mass for the Apparition of Our Lady. 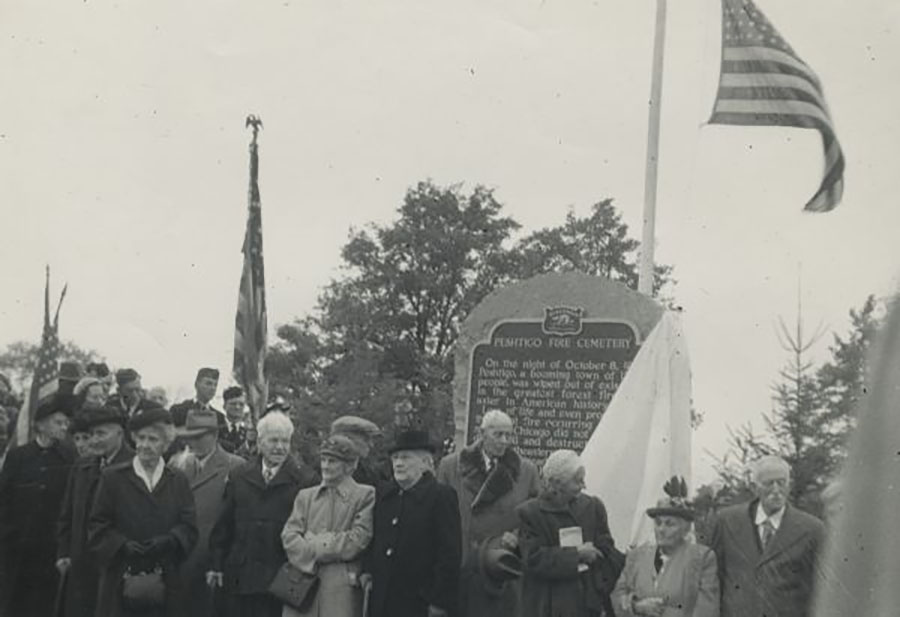 Survivors at the dedication of the cemetery historical marker, October 7, 1951

Wisconsin’s very first official historical marker was dedicated in the Peshtigo Fire Cemetery on October 7, 1951, marking the 80th anniversary of the disaster. Among those present for the ceremony were 19 survivors of the fire. The oldest was 96.

6. The Peshtigo Fire Museum is Haunted 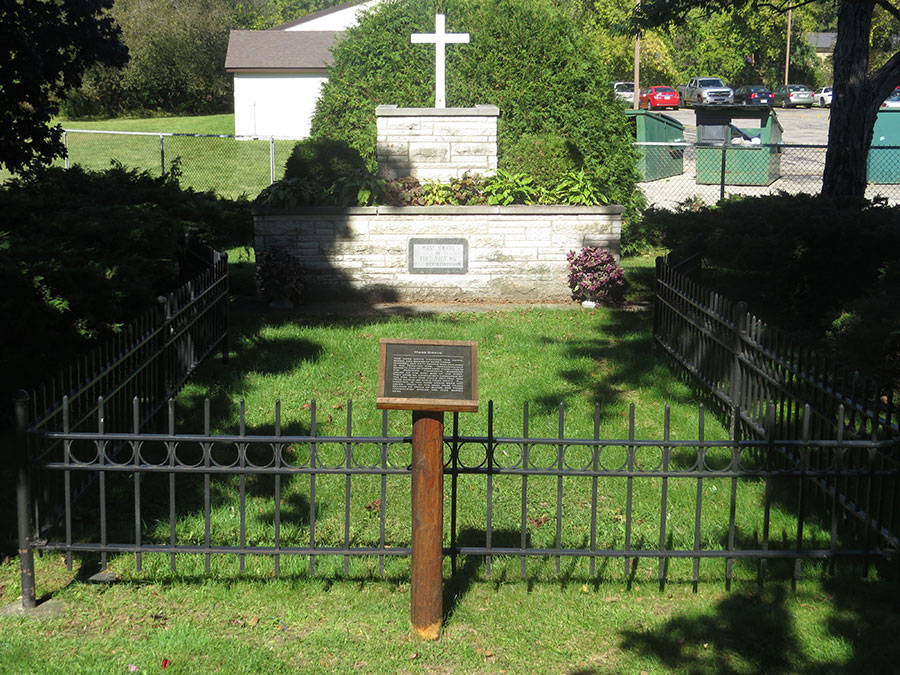 The Peshtigo Fire Museum is housed in what had been the first church built after the fire. It contains artifacts like the charred Bible found opened to Psalm 106 and 107 during a construction project in 1995, and a piece of a burned 2×4 found inside the only structure that survived the fire. Beside the museum is a mass grave where the remains of 350 unidentified bodies were buried. Either the bodies had been so burned they were unidentifiable, or there was no no one left alive who recognized them. According to the sign at the grave, many of the dead interred here were “so completely consumed by the fire that one could not tell man from woman or child from adult.”

The restless souls of those unknown victims who met a terrible fate in the flames may still be lingering. Visitors have reported smelling smoke, hearing disembodied voices, and even seeing full apparitions.

Despite being the deadliest fire in American history, The Great Peshtigo Fire has been largely forgotten, overshadowed by the fires in Chicago and Michigan that took place on the same night. But it seems those who lost their lives in the hellfire that night still remember. 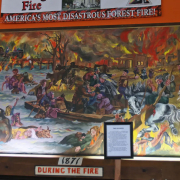