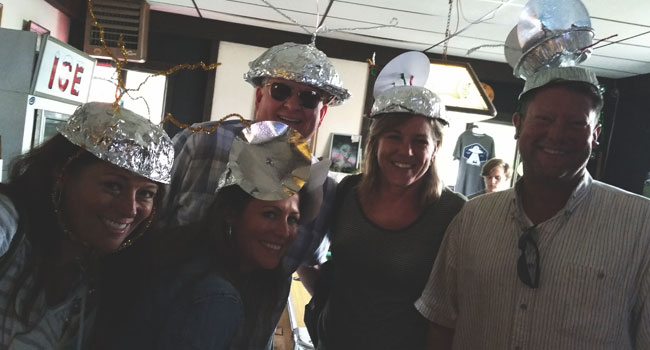 The most important thing you need to know about UFO Daze, as far as I can tell, is don’t show up with some half-assed tin foil hat.

Visitors to the annual gathering of UFO enthusiasts at Benson’s Hide-a-Way construct some pretty formidable headgear using pie plates, colanders, pipe cleaners, Christmas lights, and other shiny materials. If you’re trying to protect your cranium from alien invaders, you better bring your A-game.

This past Saturday, July 21st marked the 30th UFO Daze, a yearly tradition founded in 1988 by Bill Benson and the late Robert “UFO Bob” Kuehn to explore the strange phenomena residents of Dundee and surrounding areas had been experiencing for decades. 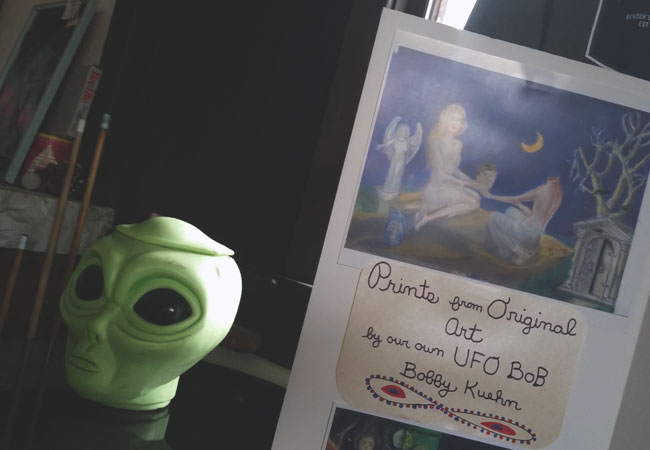 From mysterious glowing objects in the sky over Dundee Mountain or beneath the surface of Long Lake, to reports by local law enforcement of werewolves, strange things have been happening in the Kettle Moraine for a very long time.

There have been numerous sightings in the area over the years, many even occurring during UFO Daze while a crowd of witnesses watched from the lake shore as unexplained orbs and pyramids maneuvered unnaturally through the sky. 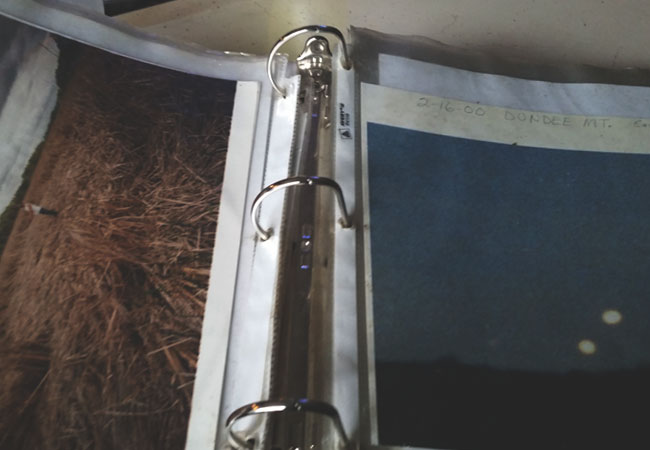 Some residents have even been in contact with the extraterrestrial visitors that frequent the area.

“Ezeata, an alien from the Plaidian star system, has communicated with him telepathically for about 10 years,” the Fond du Lac Reporter wrote about Keuhn in a 2008 article. “Ezeata visits Long Lake occasionally, even though the journey takes about 500 light years.”

As recently as last month someone filmed a UFO over Long Lake.

These days it’s easy to discount sightings as someone playing a trick with a drone, but it’s been going on for far longer than that technology has existed. And if they are elaborate hoaxes, no one seems to be coming clean. 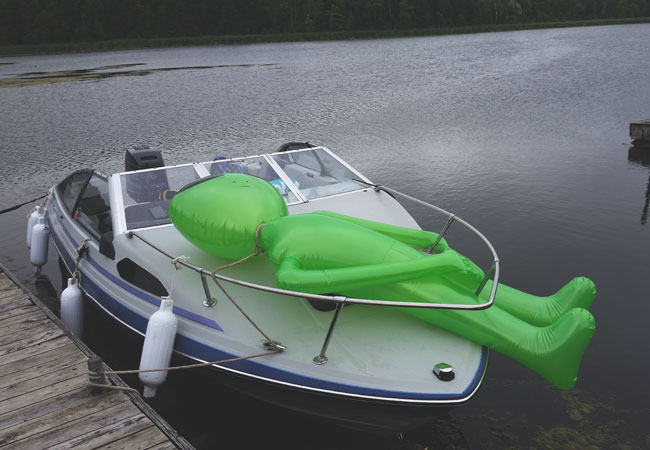 I’ve spent my entire life within a 20-minute drive of Long Lake, but it wasn’t until the notorious sightings of the early 2000s that I became aware of something happening in Dundee. Still, I didn’t set out to explore the area for the first time until just a few years ago.

For my friend J. Nathan Couch, author of Goatman: Flesh or Folklore? and Washington County Paranormal, UFO Daze has been an essential Wisconsin bucket list item since he moved here from Appalachia. It didn’t take much convincing to get him in the car.

If I was going to be abducted by aliens, I sure as hell wasn’t going alone.

Benson’s is tucked away along secluded Boy Scout Drive. The legendary UFO headquarters, bar, and restaurant would be easy to miss if you didn’t know what you were looking for. Typically, the little green men are relegated to the interior, but for UFO Daze, the parking lot comes alive with food, vendors, and strange displays like the “Genuine” Phase-4 Plasma Inter-Space Communicator that apparently fell from the sky. 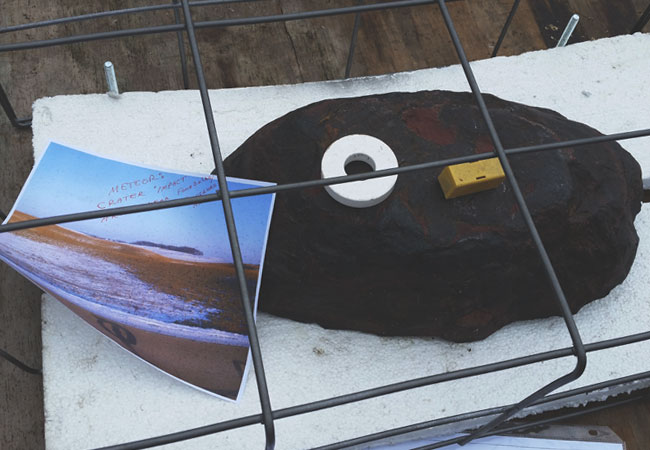 Inside the Hide-a-Way, Bill’s inner sanctum is adorned with alien novelties – UFO crossing signs, inflatable aliens, an Area 51 Grey in a jar. Speakers were sharing their personal UFO encounters in the dining area, and Bill, wearing a bright purple Hawaiian shirt, was busy behind the bar.

I had hoped to ask Bill a few questions, and speak to anyone else who had an experience in the area. But once the rain drove everyone indoors, there was little hope of differentiating who was there because they were UFO contactees from who was just there for the green vodka-spiked punch.

What has lead locals to believe Dundee Mountain may be home to a UFO base? What lurks in the depths of Long Lake? For now those questions remain unanswered. But that’s okay, because we still finally got to UFO Daze, bought some Outer Space Vodka in alien head-shaped bottles (filtered through space rocks!) and got to see Bill Benson in action. 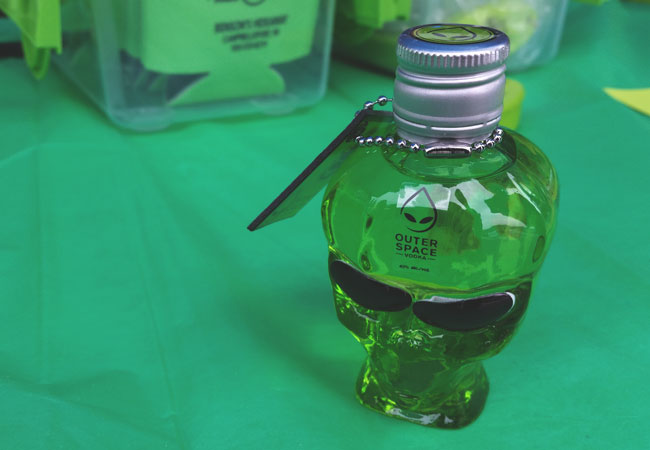 Even if it was too cloudy to see any UFOs this year, UFO Daze was definitely worth the visit. As Nate said, it was “a true Wisconsin experience.”

It really doesn’t get any more Wisconsin than drinking bear, eating brats, and looking for flying saucers. Oh, and don’t forget the tin foil hat. 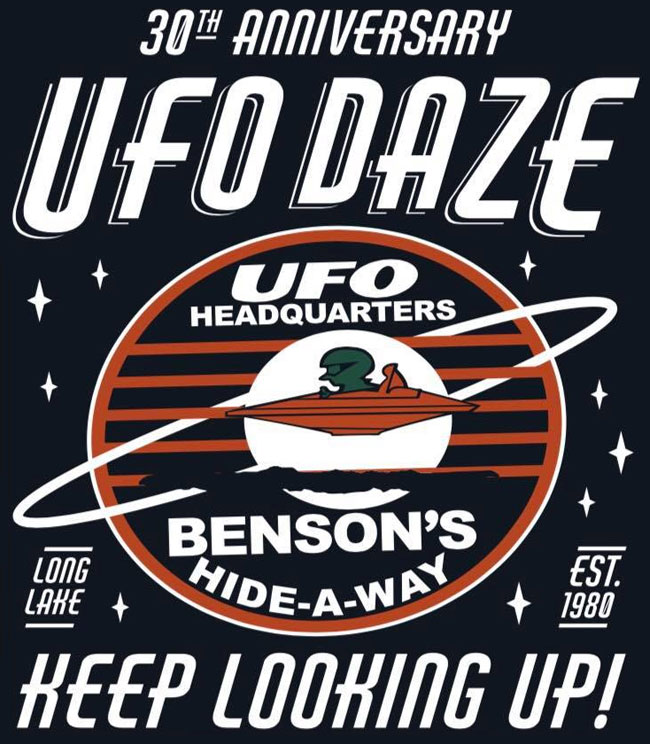 Have you witnessed a UFO around Dundee Mountain and Long Long? Share your experience in the comments below or contact us. 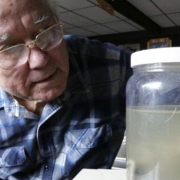 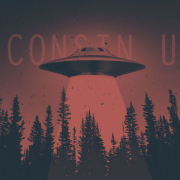