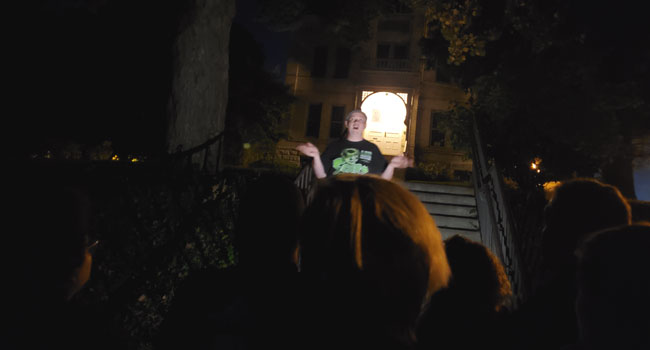 A large group gathered at dusk in front of an ominous brick building with dark windows. There, waiting in the shadows beyond the nearest street lamps, they chatted in low voices. Some were already whispering about being spooked before the ghost walk even began.

The tower of the Old Courthouse Museum loomed overhead.

It was a cool September evening in West Bend. Friday the 13th, notably. The sun set and now a bright Harvest Moon, the name given to the full moon occurring closest to the autumn equinox, glowed from behind dark clouds. A rare conjunction of eerie phenomena.

The stage was set for an evening of spooky fun, gruesome history, and spine-tingling stories of paranormal happenings with local author J. Nathan Couch.

Between recent appearances on the TRVL Channel series In Search of Monsters, History Channel’s UnXplained, and speaking at the Milwaukee Paranormal Conference, Couch has been keeping busy. And, after a two year hiatus, he decided to resurrect his popular downtown West Bend ghost walks for the 2019 Halloween season.

On this particular night, people turned out in droves to enjoy the early fall weather and hear the curious tales lurking behind the quaint facade of historical downtown West Bend.

A crowd of nearly 100 people gathered in front of the old jail and sheriff’s residence where, from the 1880s until as late as the 1960s, the sheriff and his family lived side by side with the county’s worst criminals. It’s a fitting place to begin the walk because, as Couch relates, a lot of strange things have happened there over the years.

“I’ve had a lot of first hand experiences there,” Couch says. “I’ve heard phantom banging sounds, gotten strange readings and photos, and heard disembodied voices both inside and outside the building. Interestingly enough, all my experiences have also been shared by History Center of Washington County employees who look after the site.”

If the stories Couch gathered are to be believed, the body of an unruly inmate might even be buried beneath the odd bump in the basement. 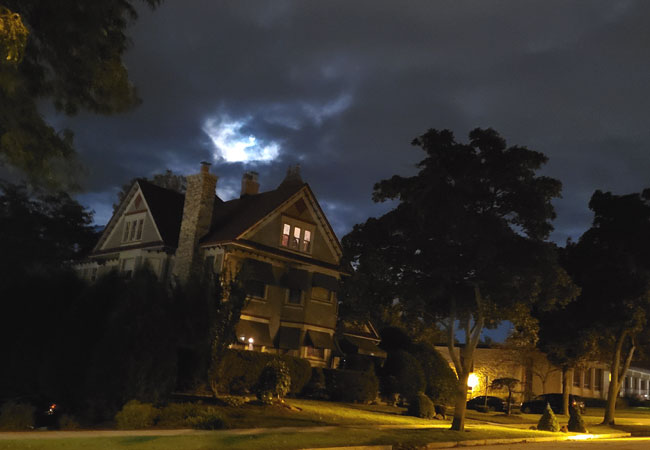 As the walk begins, Couch tells the crowd he is a Georgia native who spent his formative years digging up ghost stories to stave off the boredom of small town life. When he eventually relocated to West Bend, he felt the best way to become familiar with the area was by way of local legends.

Through his research at the Washington County Historical Society and conversations with those eager to share their own personal encounters, Couch began to uncover a trove of fascinating stories from around the county.

He could often be found digging through the archives, searching for evidence to support the lore. Did a manager of the downtown theater really die in the lobby? Was a prostitute murdered in the the Tally Ho Pub and Grill? Did a hitchhiker actually get killed on County Highway P?

“Yes,” says a woman in the crowd, in reference to the hitchhiker. In her hand, her phone screen displays what appears to an EMF meter ghost-hunting app. “He was a friend of mine.”

“We need to talk after the tour,” Couch says, and the crowd laughs.

From well-known legends like the apparition of a jogger on Jay Road, Goatman’s various hangouts around the county, and the haunted farm of Mary Buth, to the lesser known stories of giant human bones unearthed from the burial mounds of what is now Lizard Mound County Park, and a house by the YMCA seemingly so haunted it was torn down, Couch realized there were enough stories to collect into a book.

He started the Downtown West Bend Ghost Walks in 2011 while researching what would become Washington County Paranormal.

“I noticed early on that lots of the West Bend locations I was researching for the book were in downtown in an area that could be walked to and back in less than a mile and a half,” Couch says. “I decided to take portions of that research and create a walking tour. It ended up being tremendously popular and a whole lot of fun.”

Even if you’ve attended the ghost walk previously, you’re likely to have a new experience each night.

“The route changes a bit from year to year, as there’s just too many places in downtown to fit them all in one tour,” Couch says. “The stories themselves are different from night to night. The foundation of the story is always the same, but I have so many stories and experiences for each stop I only share a portion of what I have for each location. And of course, people are always approaching me with their own experiences which often find their way into the tour.”

Sometimes, unusual things even happen during the walk. 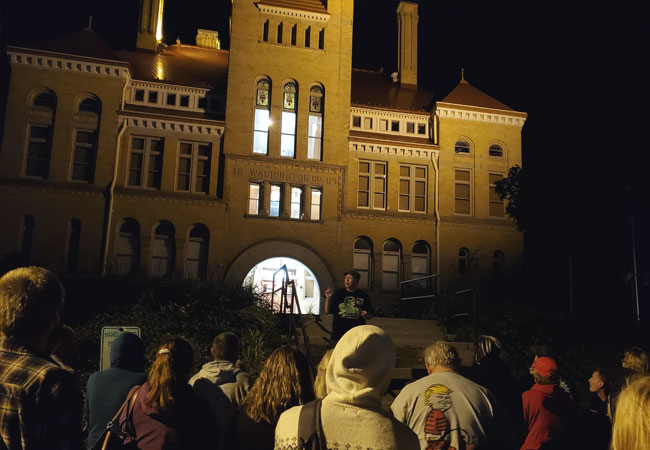 “There’s never a guarantee that anything paranormal will happen, but it has from time to time,” Couch notes.

An occurrence that happens frequently is the lights inside the exhibit rooms of the Old Courthouse Museum, the second stop on the walk, switching on and off at all hours of the night.

Attendees of the ghost walk witness this often.

Couch tells the crowd the lights are controlled by motion sensors, and for years electricians have been unable to determine why they turn on when no one is present to trigger them.

But spectral lights aren’t the only things happening around these old buildings at night.

“I’ve also had people catch apparitions in photos, get anomalous readings on EMF detectors they’ve brought with them, and I’ve had people see faces peeking through windows and shadow people prowling around,” Couch says. “The latter two I always miss because I’m always facing away from the location! Hopefully one day I’ll turn around fast enough to catch a glimpse myself.” 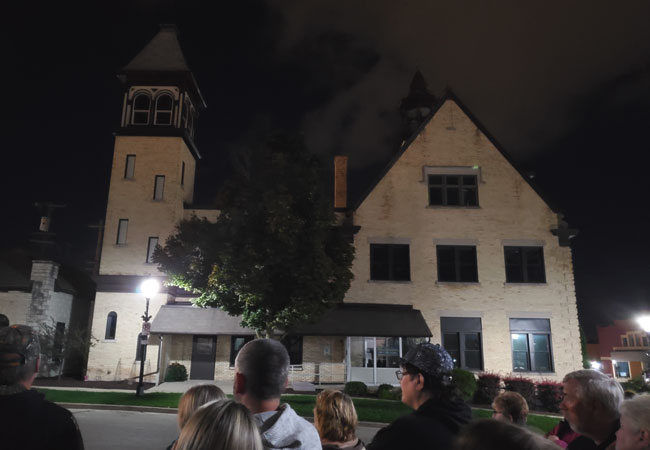 Something still lingers in the old West Bend City Hall

J. Nathan Couch is the author of Washington County Paranormal, as well as another book inspired by his research of local legends, Goatman: Flesh or Folklore?

More: Weird things to do in Wisconsin 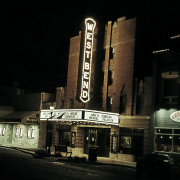 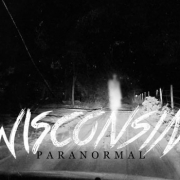 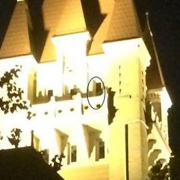 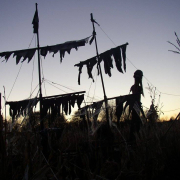