Elkhorn, Wisconsin is known for the legend of the Beast of Bray Road, a werewolf like creature that walks upright and has been the subject of numerous frightening encounters dating back to the late 1980s. Whether the creature is an actual dogman of mysterious origins, or nothing more than a case of mistaken identity, it has been terrifying locals for years.

Earlier this year, on January 29th, I received an email from someone named Danny Morgan. In the message, Morgan claimed to have been in the Elkhorn area the previous Saturday night when he saw something crazy – a wolf…running across the road on two legs. This was just a few days before the “super blue blood moon” of January 31st.

“Hey, I took this photo Saturday night in Elkhorn north of Lake Geneva after hitting a couple bars with my buddy,” Morgan wrote. “I told my brother I saw a wolf run across the road on its hind legs, figured the full moon just causes animals to act weird or I scared it but he said there are werewolves in Elkhorn.”

Morgan said he thought he was on Weeks Road, but that he “kinda got lost after I dropped my buddy off and just went north until I found 43.”

Weeks Road is just a few miles from Bray Road.

WTMJ 4 received a similar email from Morgan. In an article that has since been removed titled “Great Scott: Wolf walking like a human?” Today’s TMJ4 wrote:

A wolf that “ran across the street almost like a man.”

That’s what Danny Morgan said was the “craziest thing I’ve ever seen” in an e-mail to WTMJ sister station TODAY’S TMJ4.

Morgan shared that photo which he says was taken on Townline Road in Elkhorn.

He said he “saw a wolf come cross a corn field and it got up upon its hind legs.”

The article included a somewhat clearer photo than the one I received: 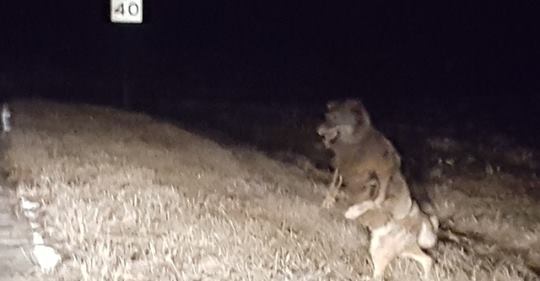 Seth Breedlove, cryptozoologist and filmmaker whose company Small Town Monsters produced a documentary about the Beast of Bray Road, shared the image on Facebook and wrote, “Haha I could’ve come up with something way better than this. It looks like someone’s German Shepherd out for a stroll.”

In an email to the National Cryptid Society, Lon Strickler of Phantoms and Monsters wrote:

“I talked to the witness (Danny Morgan). From what I can tell, he had just dropped his friend off at his home (I’m keeping the actual location under wraps at the moments) He noticed the wolf in the cornfield (on 4 legs) walking towards the road. His camera was handy, because he had never seen a wolf in the wild. He slowed…and when the wolf approached the road it stood up on 2 legs and walked quickly across the road. He said it walked just like any human would…didn’t stumble or look awkward. The wolf was also swinging its front legs, like a human walking. Honestly, I believe the guy… Lon”

“Werewolf sightings in Wisconsin were first catalogued in print in the 1930s,” Mysterious Universe writes.

The first reported sighting of a dogman or werewolf in Elkhorn came in 1989.

“Lorianne Endrizzi saw a dark figure on the side of the road she mistook for a person. When she drove closer she saw it was a tall, hairy monster with the face of a dog, with prominent fangs and glowing yellow eyes. A local dairy farmer also saw the creature on his property that year, as did another driver on nearby Bray Road, and an 11-year-old girl who saw a dog walking on two legs across her family’s property near that road.”

Linda Godfrey, author of The Beast of Bray Road: Tailing Wisconsin’s Werewolf, has been covering the case since the beginning, and has received hundreds of similar reports.

“Whatever it is, there is more than one,” Godfrey told NBC 15 in 2009. “It seems to be more of a scavenger that wants to frighten people. Maybe it’s territorial. It seems to want people to leave it alone.” 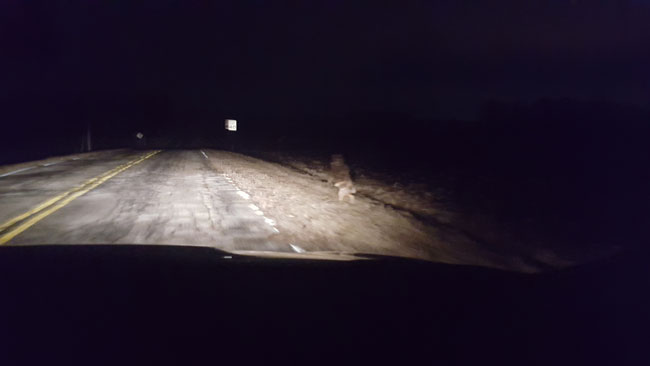 “Who knows,” Morgan concluded in his email, “maybe it was a werewolf.”

Have you had a similar encounter with a Wisconsin dogman, werewolf or the Beast of Bray Road itself?